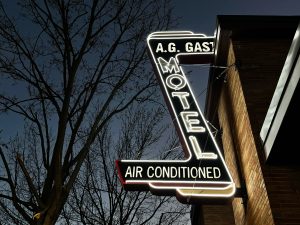 Birmingham, AL – Mayor Randall L. Woodfin joined representatives from the city and the National Park Service to light the iconic A.G. Gaston Motel sign today, marking the completion of Phase 1 of the restoration of the historic site.

“The A.G. Gaston motel sign served as a beacon to black families traveling through the segregated South,” Mayor Woodfin said. “It’s a sign that will now shine in remembrance of Dr. A.G. Gaston’s legacy – a legacy of Black prosperity, equal opportunity, Southern hospitality and freedom.”

The A.G. Gaston Motel is included in the Birmingham Civil Rights National Monument, which was established in 2017 by President Barack Obama. A multi-phase restoration began in 2019 on the 1954 wing of the hotel. This wing includes Room 30, known as the “War Room,” where Project C was strategized by the Rev. Fred Shuttlesworth, Dr. Martin Luther King, Jr. and other civil rights leaders. Exterior restoration of the 1954 wing is now complete.

“This is a major milestone in the restoration of the A.G. Gaston Motel. We now look forward to the completion of the 1968 wing and courtyard of the motel,” said Denise Gilmore, senior director of the city’s Division of Social Justice and Racial Equity. “This affirms our collaborative partnership with the National Park Service and represents a significant step in preserving the culture and history of the civil rights movement in Birmingham.”

“The completion of Phase 1 is an exciting achievement for all of us,” said Kristofer B. Butcher, superintendent of Birmingham Civil Rights National Monument. “It’s an important step in preserving the Gaston Motel and standing up operations and visitor services at Birmingham Civil Rights National Monument. We are immensely proud of our partnership with the City of Birmingham and look forward to continuing our work together. ”

The original “Z” shaped sign on the motel was reconstructed and installed using historic photographs as a guide. Original 1954 drawings of the motel building exist but do not contain information about the original sign. The size of the sign was determined by identifying clues in the photos, such as counting brick courses and alignments with the building soffit. The lighting of the reconstructed sign is LED, which will have a longer service life and consume less energy while capturing much of the character of the original neon sign.

Phase 2 restoration is currently underway on the exterior of the 1968 wing and courtyard of the motel. Work is expected to be complete in early summer 2022.