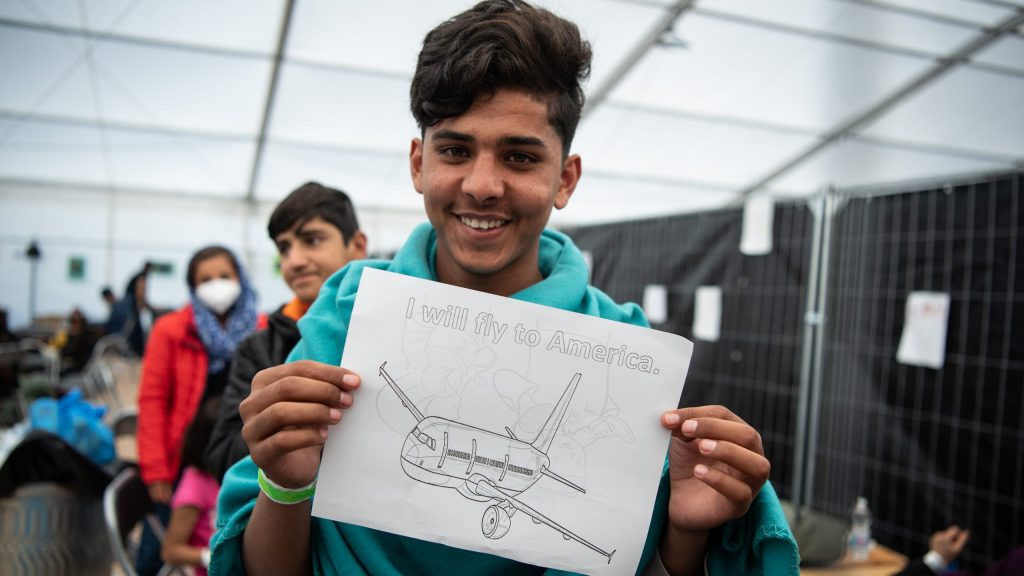 While helping evacuees from Afghanistan at a US government facility in Virginia in September, I was struck by the excitement of the families gathered around women as they signed work authorization forms. Husbands and children clapped as the most important women in their lives claimed their own identity and took an important step toward a brighter future.

A new day is coming for them. Soon, they’ll be signing agreements for housing, sending their children to school, and accepting offers of employment. Many of these women are signing their names for the very first time.

And once they recover from their arduous journey, these refugees will start sending money home, finding one another—and slowly organizing the future of Afghanistan. US decision makers would be wise to seek their wisdom about what to do next.

Although Gen. Mark Milley, chairman of the Joint Chiefs of Staff, described the August US withdrawal from Afghanistan as a “strategic failure,” that’s not how the story ends. The war may be over, but the evacuation of Afghan allies presents US officials with a new strategic opportunity by helping them rebuild their lives and, eventually, make significant contributions to both the United States and their homeland.

History is revealing: The more than 140,000 Vietnamese refugees who were resettled in the United States after the fall of Saigon in 1975 offer a glimpse of what refugee populations can do.

Today, the Vietnamese-American community owns more than 310,000 businesses and generates an estimated thirty-five billion dollars for the US economy each year. There have been Vietnamese representatives in Congress and high-ranking military officials. Gen. Lapthe Flora, a former refugee who served as the commanding general of Combined Joint Task Force-Horn of Africa and is now a special assistant to the director of the US National Guard, has cited his own experience as an example of how American power can transform lives and foster stability in partner nations.

Vietnamese communities are also at the forefront of supporting a new State Department model for refugee resettlement that allows private citizens to support refugees on the community level. On the government level, funding for this measure was included in a recent emergency supplemental appropriations bill signed into law by US President Joe Biden. It includes resources for government agencies to provide essential services to Afghan arrivals who entered the United States as parolees—a discretionary Department of Homeland Security status that allows people to enter the United States without immigration status (and that normally would prevent them from receiving refugee benefits). Most of the Afghans who got out of the Kabul airport arrived in the United States as parolees, so sponsorship will provide an additional mechanism for communities to fill gaps in services.

Now is the time to start considering the strategic impact of Afghan refugees.

As someone who has interviewed them, I can attest that they’re former government officials, military officers, and pro-democracy activists—in other words, potentially the future leaders of Afghanistan, if the Taliban regime were to crumble. They are also teachers, business owners, and others who make up the fabric of Afghan society. Each one has something to say about what it means to build a nation, and by listening, the United States can help forge a better path forward in Afghanistan.

Their stories will not be the same as those from corrupt leaders who failed to make good on their promises. Their insight will be more genuine, reflecting an honesty that comes only from people with nothing left to lose.

Resettlement also offers these Afghans a chance to reimagine the future of their country while living in peace and security. Although integrating into US society will take time, evacuees have an enormous opportunity to prosper in America. Many of the Afghans I spoke to are ready to engage, including by attending—and teaching at—local schools, and perhaps even joining the US Army if they’re eligible.

An unprecedented interagency effort is currently underway at eight US military bases to temporarily house some fifty-three thousand Afghan guests until they can be placed in new homes. This effort is more than a humanitarian gesture; it represents the best possible continuation of US foreign policy—not least because it offers the United States a fresh perspective on how to work toward peace in Afghanistan.

As millions of Americans gather around the Thanksgiving table, tens of thousands of Afghan refugees who have already left US military bases will also be celebrating. Whether they’re making Kibuli Pilau, the national dish of Afghanistan, or roasting a turkey doesn’t matter. Rather, what matters is remembering the shared story of how the United States and Afghanistan came together in common cause for decades—and how that experience will evolve in the weeks, months, and years ahead.

Sarah Dawn Petrin is a nonresident senior fellow with the Transatlantic Security Initiative in the Atlantic Council’s Scowcroft Center for Strategy and Security. She is also a former advisor to the US military and NATO on developing strategy, policy, and doctrine for the Protection of Civilians and Women, Peace, and Security and has worked with refugees in conflict zones for more than twenty years.

Image: A young Afghan man holds up a sign at Ramstein Air Base in Germany on October 8, 2021. Photo by Boris Roessler/dpa/REUTERS