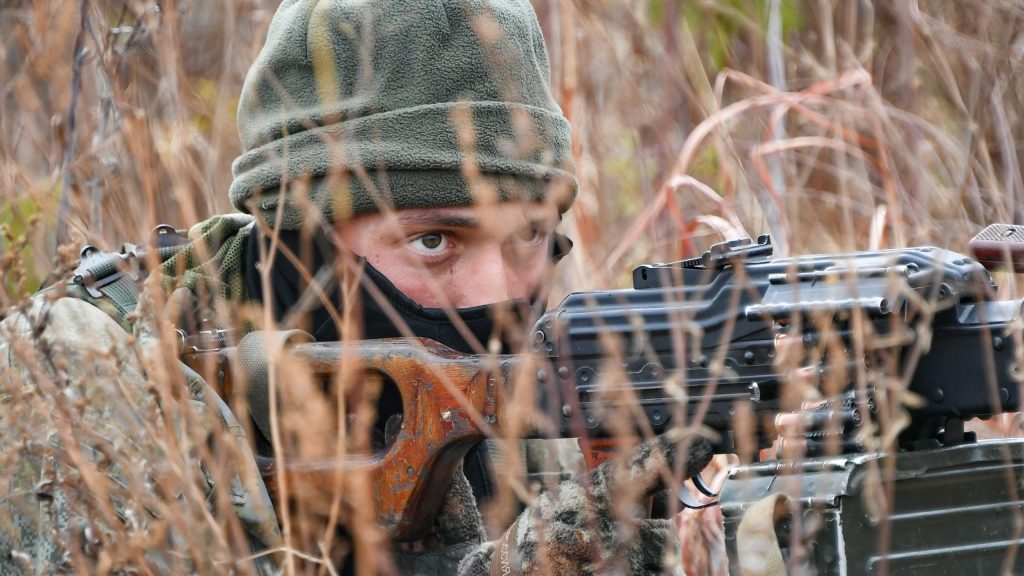 Russia’s recent military build-up near Ukraine has sparked fears of another invasion—with tens of thousands of regular troops, armored forces, and elite ground units taking up positions within 140 miles of the Ukrainian border, sometimes at night to conceal their movements. US officials have warned allies that an incursion may be imminent, and that time is running out to thwart those alleged plans.

As Western intelligence officials scramble to assess Moscow’s next moves, anyone who watched September’s Zapad-2021 joint military exercise between Russia and Belarus was treated to a variety of important insights that could be particularly telling. While there was plenty to glean at the operational and tactical levels about Russian capabilities, doctrine, and techniques, some of the most significant implications for the West were at the strategic level—including Moscow’s partnership with China, its designs on the Arctic, and its perception of international arms-control agreements.

All but quiet on the Western front…

For one, Russia’s recent troop movements reveal that the Sword of Damocles still hangs over Ukraine.

Despite the Kremlin’s reported withdrawal of the troops it amassed on the Ukrainian border in April—the last time it stoked international fears of an invasion—as much as 90 percent of the equipment and personnel were actually left in place. Initially, some speculated that these forces were left there in preparation for Zapad-2021; but the exercise is now over and Russia has only boosted that presence (rather than relocating it elsewhere) in recent weeks.

From a strategic perspective, both the recent build-up and the large post-Zapad residual presence suggest a doubling down of Moscow’s strategy toward Kyiv: keeping Ukraine out of NATO by deterring and, if necessary, forcibly preventing the country from altering the situation in the Donbas through military means. Given Russia’s greatly reduced soft power in Ukraine, as well as the diminished trade relationship between the two countries, Moscow’s statecraft toolkit is more limited today than a decade ago—but it clearly includes the deterrent strength of the massive force presence arrayed near Ukraine.

Meanwhile, Zapad-2021, which was held in Belarus and Russia’s Western Military District, also revealed that Moscow’s relationship with Minsk has gotten somewhat closer. Where there’s no love lost between Russian President Vladimir Putin and his Belarusian counterpart, Alyaksandr Lukashenka—with some even arguing the former views the latter as a buffoon—the joint exercise provided evidence of an increasing strategic and military partnership between the two.

Minsk displayed a willingness to host the deployment of (and conduct interoperability training with) thousands of Russian troops. For example, they established a new joint combat training center in Belarus designed to train air force and air defense units, and that’s where Moscow deployed its Su-30 fighter jets to fly joint missions and patrol the two countries’ borders.

To some degree, these moves also reflect the broader strategic trend toward closer political relations between the two countries, which have now both managed to alienate the West through a variety of self-inflicted missteps (such as the brutal suppression of the Belarusian opposition and, of course, Russia’s annexation of Crimea). That’s why Putin and Lukashenka may be more inclined to cooperate with each other, probably at the West’s expense.

…and hesitation in the East

But notably absent was China, which chose to send only observers. That’s despite its contribution of troops to each of the three previous strategic-level exercises held in Russia: Vostok in 2018, Tsentr in 2019, and Kavkaz in 2020. Given what some argue is a growing level of exercise activity between China and Russia, Beijing’s decision to avoid Zapad-2021 seems counterintuitive.

Also curious were the optics though which Moscow presented Russian-Chinese military cooperation. Just weeks before the active phase of Zapad-2021 began, between ten and thirteen thousand troops from Russia and China participated in a large-scale exercise in China’s north-central Ningxia region. Originally known as “Sibu/Cooperation-2021,” it was then subsequently rebranded as part of Zapad-2021 under the moniker “Zapad/Interaction 2021.”

Why would Beijing participate in a Zapad-affiliated exercise, yet not send troops to Belarus and western Russia for the main event? Because it’s eager to keep Europe in play by avoiding the image of being a security threat on the continent—even though it already is one.

China likely recognizes that the exercise is the only Russian military event that routinely garners mainstream press attention throughout Europe and in the United States. If it had sent combat troops to participate, that likely would have drawn widespread negative attention—lending credence to Washington’s argument that China is indeed a security threat to Europe today, not in some distant future or far-off location.

Despite a growing body of evidence, most in Europe don’t view China as a security threat. After the NATO summit in June, for example, French President Emmanuel Macron noted that “China is not in the North Atlantic.” Chinese leaders are probably quite keen to maintain this misperception that they’re not in Europe’s neighborhood, which explains their abstinence from sending troops to Zapad-2021.

Zapad-2021 also showcased Russia’s drive to modernize its military. One of the most significant strategic conclusions to be drawn from those drills centers on its efforts to learn lessons from recent military operations, especially in Ukraine, Syria, and Nagorno-Karabakh, and to develop and field advanced military capabilities in response.

With regard to recent military operations elsewhere, the drills featured the significant use of unmanned platforms and cruise missiles—which it has used or observed in use in Ukraine, Syria, and Nagorno-Karabakh—to repel enemy forces, especially unmanned enemy drones. Russian military exercises remain highly scripted affairs relative to similar events conducted by Western militaries; sometimes troops even conduct a practice exercise before the actual exercise to ensure a successful outcome. Yet the “scripts” that guide such events clearly include lessons gleaned from recent operations that the Russian military has participated in or observed closely.

In terms of advanced capabilities, the Russian military also tested several new pieces of equipment, including unmanned hardware, vehicles, and counter-drone technologies. This reflects its desire to counter its technologically advanced Western adversaries—especially in terms of developing precision-guided conventional weapons; hypersonics, artificial-intelligence-assisted weapon systems; unmanned platforms; networked command, control, and communications systems; and advanced cyber capabilities for contesting the information environment. Still, there is no guarantee the Russian state treasury has the fiscal wherewithal to make good on the capability and capacity ambitions of the Ministry of Defense.

Zapad-2021 also revealed the increasing strategic importance of the Arctic.

Although parts of Zapad-2021 occurred near the borders of Poland and Lithuania and in the Mulino training area roughly 225 miles east of Moscow, much of the action at sea and along the coast involved the Russian Northern Fleet—which was upgraded to a Military District earlier this year and played a much more prominent role than in the last Zapad exercises in 2017. That upgraded status consolidates all Russian military assets and capabilities, regardless of service branch, under a single administrative entity and strengthens the hand of the Northern Fleet in competing for resources.

The fleet’s primary mission is to maintain the readiness of naval strategic nuclear forces based on Russia’s Barents Sea coast, but it also leads Russian exploration missions and patrols in the greater Arctic Ocean. Its heightened role probably reflects the increased significance of the Arctic region in Russian strategic thinking and planning.

Lastly, Zapad-2021 provided evidence of Russia’s continued disdain for most international arms-control agreements that limit its ability to develop, conceal, and field destabilizing offensive military capabilities and activities in Europe.

Just days prior to the start of the exercise, the Russian Ministry of Defense stated that roughly two hundred thousand troops would participate in Zapad-2021. But by claiming these forces were actually engaged in a series of disparate and discrete training events, Moscow circumvented its Vienna Document obligations, effectively nullifying the agreement’s confidence and security-building intent.

The preference in Western capitals to maintain the moral high ground and use confidence-building measures to send deterrent signals when it comes to politically binding agreements such as the Vienna Document or the 1997 NATO-Russia Founding Act could eventually undermine European security. At some level, diplomacy and dialogue with Moscow are necessary—but this must be balanced against the need to both protect Western interests and incentivize Russian leaders to rejoin the arms-control fold.

For the moment at least, Zapad-2021 clearly signals Moscow’s disinterest in serious arms-control and confidence-building measures in Europe, raising the question of whether such tools work when they’re most needed.

Arguably, some of these conclusions are somewhat more operational than strategic. But the key takeaway here is the enduring nature of the acute Russian threat confronting the West—not merely in the geographic space from the Barents to the Baltic to the Black seas, but in the cyber, information, and political realms as well. Although Russia may be in long-term decline for economic and demographic reasons, it will remain a serious, existential, disruptive threat, even as China increasingly consumes Western attention and effort. The worrisome build-up of forces near Ukraine’s borders is proving the case yet again.

This article is part of a Transatlantic Security Initiative project on defense in the Baltic Sea region supported by the government of Lithuania.

John R. Deni is a nonresident senior fellow with the Scowcroft Center’s Transatlantic Security Initiative and a research professor of joint, interagency, intergovernmental, and multinational security studies at the US Army War College’s Strategic Studies Institute.

Image: A Russian soldier takes part in a military exercise by the Pacific Fleet at Gornostay Range in Primorsky Krai. Photo by Yuri Smityuk/TASS/Reuters