Jordan Hollis led the Hawks with 6 kills and 15 total attempts, followed by Kennedy Chambers and Kamea Nash, both with 5 kills, and 10 and 15 attempts respectively. Hollis also collected 9 points for the Hawks. Jessi Hilyer led the team in assists with 13, while Morgan Ilsley notched 10 assists. 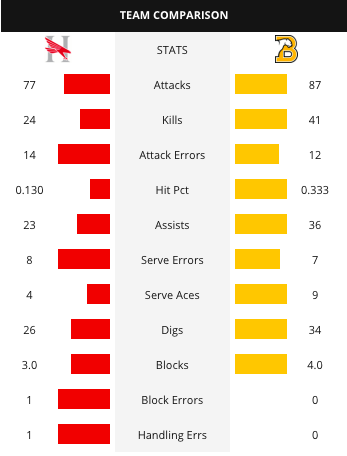 Huntingdon is back in action on Friday, September 10, to take on Westminster (Mo.) and Texas Lutheran, at 1 PM and 4 PM, in Day 1 of the Rhodes Tournament. Day 2 of the tournament on Saturday, September 11, includes matches against Austin and Rhodes, at 1 PM and 3 PM.